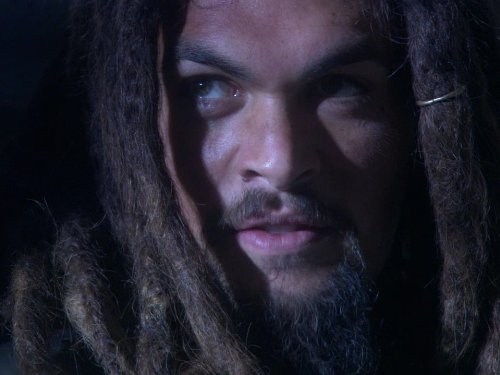 Sheppard and his team visit a planet but Ronon feels that he's been there before. In his days as a runner, the Wraith had hunted him there, causing much destruction and resulting in the death of the local leader's daughter. They haven't forgotten and soon have the entire team in captivity. Turned over to the Wraith, Ronon is once again forced into being a runner and they return him to his home planet of Sateda. In flashbacks, key events in Ronon's previous life are revealed. Needless, his friends don't just sit by idly but head to Sateda to help him.
After a group of people captures and gives Ronon to the Wraith, he becomes a runner again, but this time he's left in his home planet, Sateda, where the Stargate has been disabled.
In my opinion, this episode is one of the best of the Stargate Universe. Robert Cooper outdid himself. The story itself is not too unusual: hero goes back to devastated home, has it out with long-time nemesis. However, the layout of the story was really well done, particularly once at Sateda. The presentation of the Sateda story was breathtaking, with excellent direction and photography as well as film editing. The humorous interaction between Rodney and Carson was just the right touch.

One note. Had I been editing for story, I would have had Ronon grab his wife(?) in a desperate bear hug at the end of their first scene, not just grab her hand. That would have presented a nice bookend to Ronon's hug of Carson (obviously a friendly not loving or desperate hug), and given a bit more strength to the story point that he once again was neither alone nor shut off emotionally. Just my thoughts. This is not my favourite episode, but it's far from being the brainless 40mn action scene that I remembered after first watching it. As the first (and almost the only) Ronon-centric episode, it says a lot about the guy --but it does so in a typically close-lipped way. For the first anniversary of his coming to Atlantis, Ronon literally retraces his steps as a Runner and a Satedan, which obviously involves a lot of guilt and bad blood before he can finally come to terms with his personal ghosts.

The episode begins with a brief follow-up on an event mentioned in Runner: that as a Runner, whoever helped Ronon immediately became prey for the Wraith. This is a good start to let us into Ronon's feelings, because even though he was a victim, the fact remains that he unwillingly brought about the deaths of many innocents and still blames himself for it. The second, and longer part, brings him back both to his now devastated homeworld, and to his Runner trials. The inevitable action here may be quite impressive, but I can't find much interest in it; what makes the whole sequence really fascinating is how it brings Ronon full circle, superimposing vivid flashbacks of his past to his present fight to the death. Beyond revealing more about Ronon, those memories also show us that this gruesome, lifeless place used to be a world much like ours, with people much like us. Even Ronon used to be a man like any other, until he saw everything he loved disappear before his eyes. Talk about survivor's guilt. Congrats to Jason Momoa for really making his few lines count and giving them feeling. But I also appreciate that even Ronon still has room to evolve as a character. Even though he wants to carry out his personal vendetta by himself, even though he probably expects to die, in the end he accepts his friends' help -a sign that he's moving on.

Apart from Ronon there are also good moments for the others. Sheppard and Teyla share a nice awkward conversation on the Daedalus while McKay and Beckett provide some welcome comic relief. I also notice a few hints of things to come: Ronon's wife telling him that "you can't run forever" is rather prophetic. And when Teyla says that she is relieved to know how far her friends would go to get *her* back if she ever found herself in Ronon's situation... well, that strikes me as meaningful.