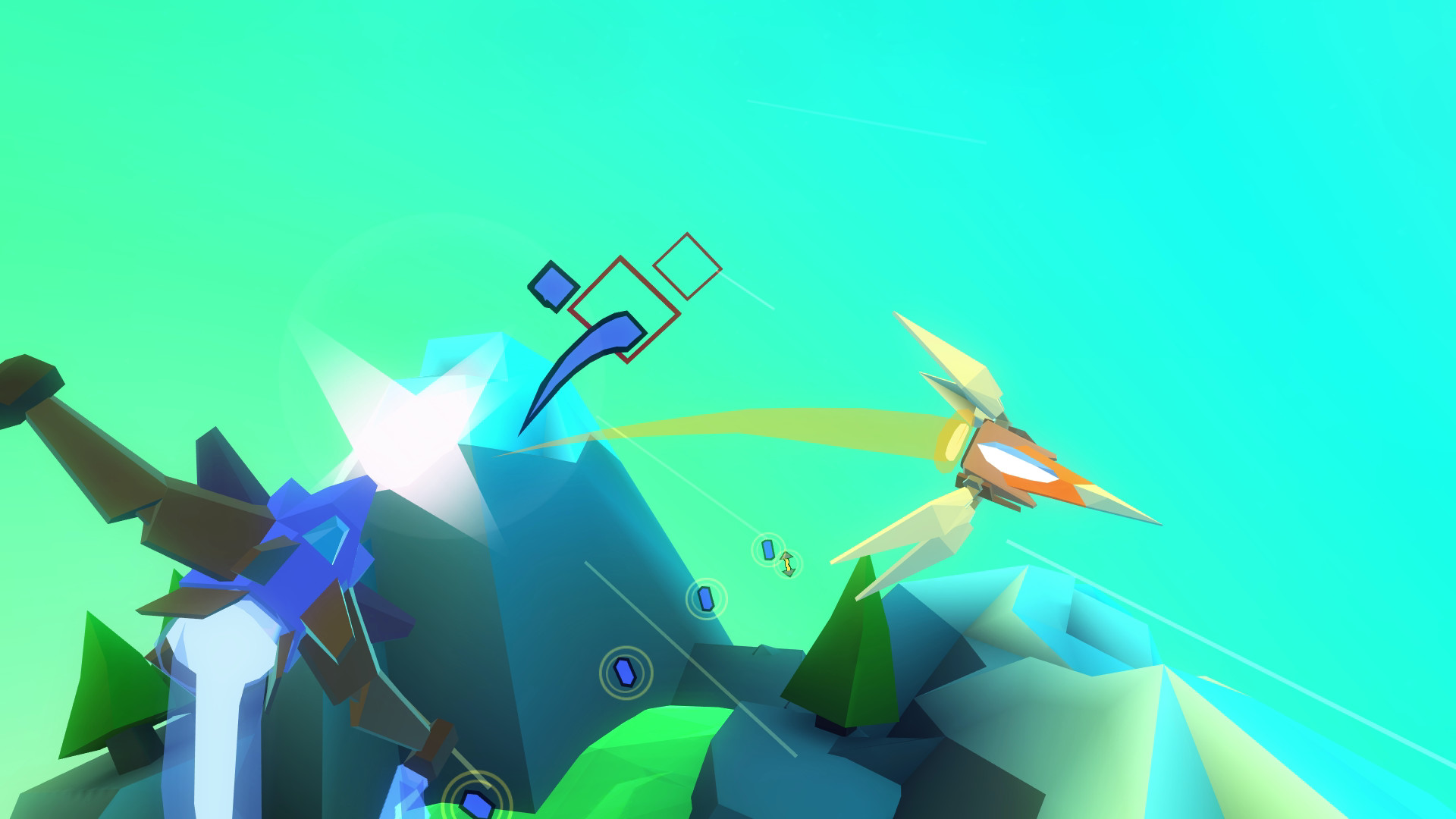 Super Sky Arena is a modern re-imagination of the Starfox multiplayer mode. You pilot a jet fighter to have fast paced dogfights against three of your friends. Play either locally, in splitscreen mode, or create an online game and let your friends join from all over the world. And if your friends are busy, you can always play against the AI to train for future confrontations.

We plan to create the ultimate multiplayer experience for this game. To do this we developed (and are developing) many different forms of multiplayer gaming you can enjoy with your friends. 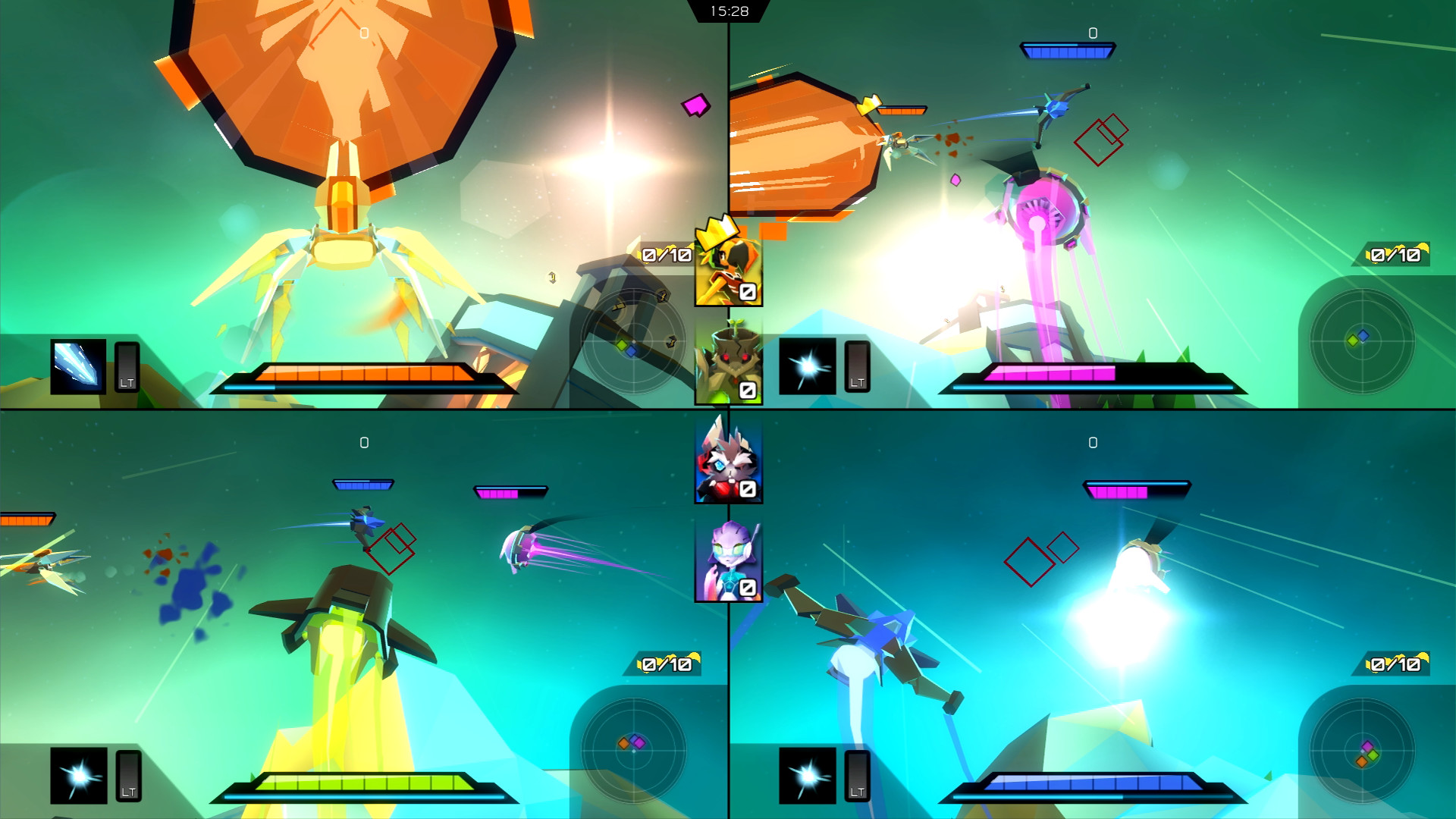 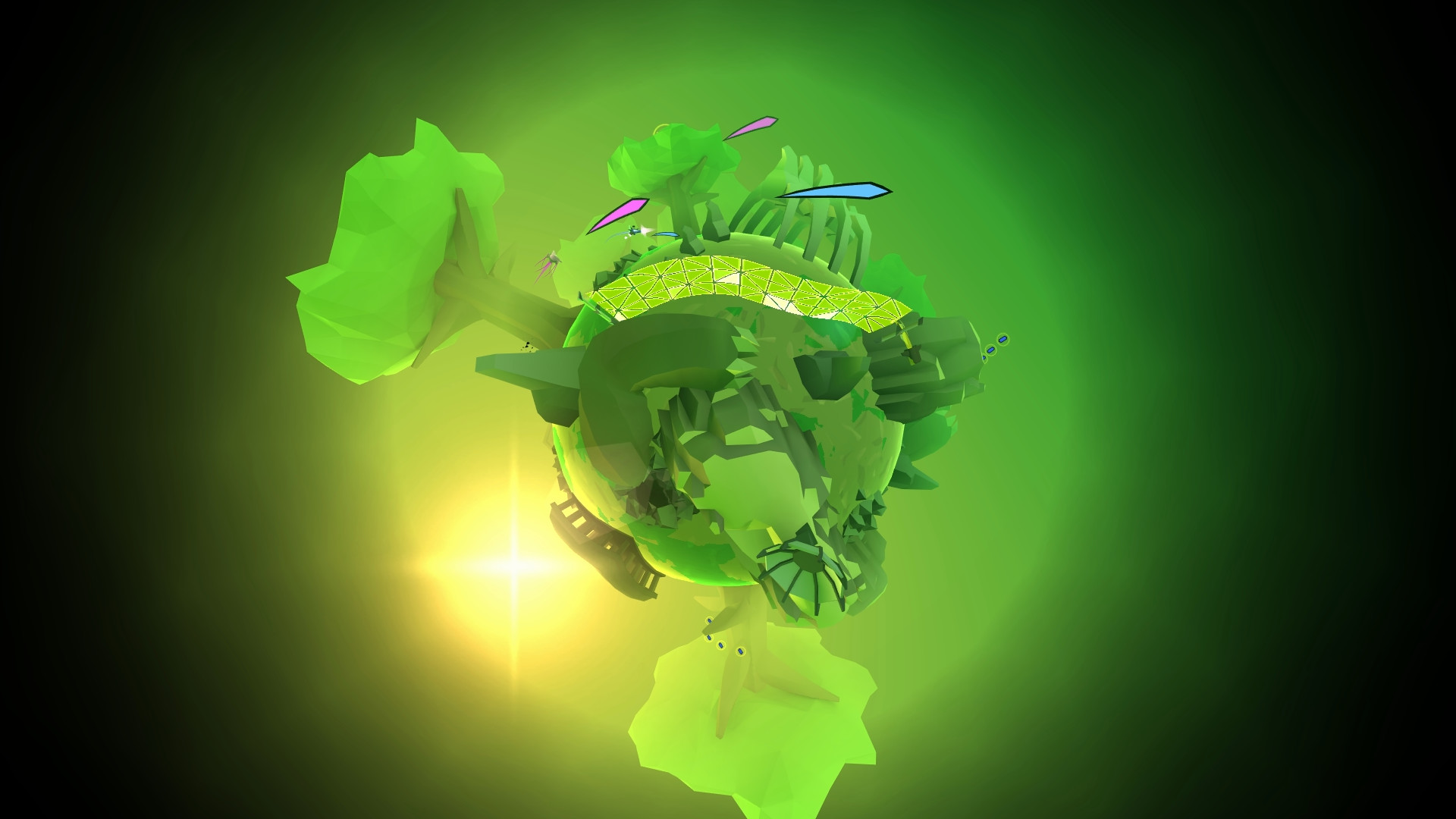 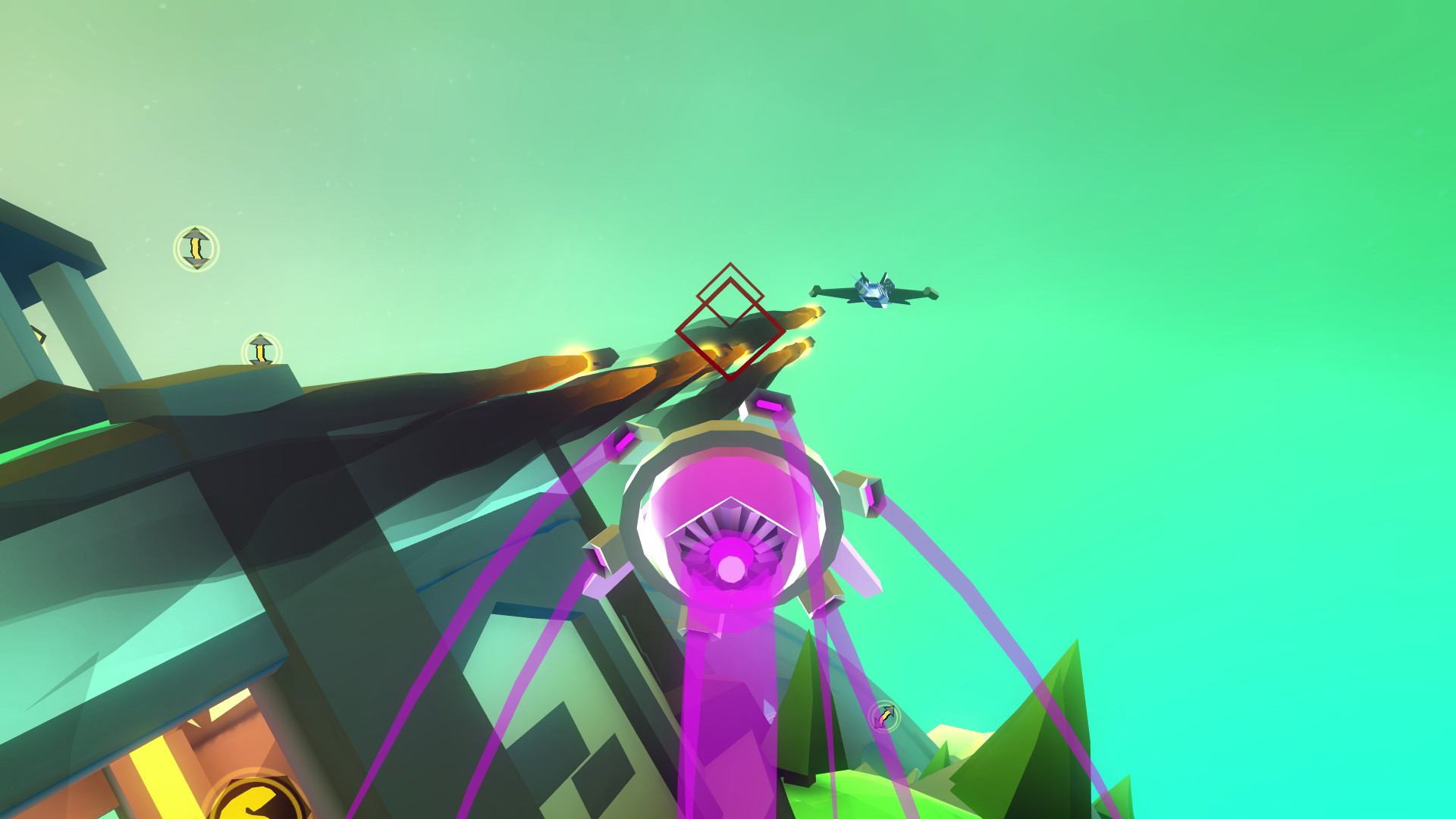 Hey there all. First off, I've had my experience with Starfox games since I was 4 with Starfox64 being my first, to playing all others eventually including the unreleased Starfox 2(snes). With this game being multiplayer focused, I was at utmost happy with a game like this coming into existence. I've played multiplayer modes of all starfox games as well with friends over the years and had a blast playing them all(with the probable exception of SF64's multiplayer which SF64 3D improved on).

Onto Game Review
(Based off playing some local multiplayer with friends, playing with devs online, and playing with a couple friends online)

~Controller functionality~
I like the responsiveness on controls. Quickly pointing out however that the game at its current state does not have button mapping nor have support for D-Input controllers either it seems, only for X-input controllers at the moment. I'm sure this is something that will be dealt with in a future update.

~Gameplay customization~
Something I'm really glad was implemented that seems to be extending to what SF Assault and SF64 3D offered as far as game customization. It makes you feel like your setting up a game of Smash in your own way.
Time, Lives, and Points. These are your gamemode options very identical to how SF Assault had those choices. Your able to also choose if the dual lasers item should be a thing or not on the map(thank you) as well as choosing how items are on the map as well.

~Gameplay Balance~(in current version when this was written, may or may not be addressed in the future)
Lasers: My immediate beef with this is the weird recoil it causes that slows you down for that brief moment you shoot, it's not something I was as comfortable dealing with as the other SF games didn't have this kinda behavior with the lasers. Damage seems perfectly fair enough but what discourages me(and a couple of my friends) from optimally using the laser over the charge shot is that it's not as accurate enough and it doesn't have that rapid behavior that SF64(3D) and SF Assault did.
Charge shot laser: This one is kinda funny to talk about. It's balanced, just not in the most normal way. This shot can literally go through walls and ground which can be abused. What does hold it back however is that it takes so long to charge compared to other SF games. Speaking of which, I visually get thrown off by thinking my laser is fully charged with the reticle changing right as you begin charging as opposed to it changing right as it becomes charged similar to how it does in SF64(3D) and Assault. Another issue is if you make a collision that would otherwise bounce you to the side or backwards with or without being stunned, the charge goes away, which is normally acceptable, except that idea that you'd generally still be holding the laser button while having done so, in result it doesn't actually restart the charge even if you are still holding the button after collision.

~Mobility~
I once again have mixed feelings about this one. Going into a complete stop with your ship is something foreign to the other SF game's arwings with the only pseudo exception being the Arwing in SF Assault which using the "Brakes" allows for a close to halted movement, which however was limited by a meter. In this game you can basically just sit still if you wanted to with your ship which kinda worries me cause there were sometimes where I purposely abused this to achieve some kills, in thus can promote a campy play style. I don't dislike the idea of having ships go into a complete stop, but in my opinion I feel like there should be a carry off to this to avoid benefiting from camping.
Speed: I know there are pickups that allow you to go faster, but at default I feel the ships movement speed doesn't feel as natural without having to constantly use the infinite amount of boost you have which I feel right now is the only ideal way to even move to begin with.
Barrel Roll: They don't reflect laser bullets :v ... but that aside, I did like what they did with it essentially being a strafe tool.
Looping: Something interesting they did with this one. Going for a U-turn or a Somersault? Same button. When you press it, it starts to curve you upward in a loop, manually pressing it again in the middle of it will cancel the loop phase, meaning you can use it to create a U-Turn maneuver or you can cancel it immediately if you feel it seems like a bad idea. It's really flexible and it was something I didn't even expect to think about when it comes to a SF like game. My only issue is that it doesn't feel as fast as SF64(3D)'s somersaults, the difference is kinda little but with the amount of SF64(3D) I played and it's multiplayers, I really feel the frames matter.

~Visuals~
Pretty...
Um maybe with the exception of Molten Core which was sometimes hard to see where you were going in the caverns, I don't think the lighting was very friendly with that and it was something that was talked about me and my friends.
Otherwise the use of color is very different compared to the SF games though I do feel like it's going for a more brighter and colorful SNES(referring to SF and SF2) style. The idea is really neat.

~Online~
Having playing with the devs online with their location being in Europe with me located in the West Coast of the US, and pinging at around 130-160. The game is surprisingly still playable with some hiccups of here and there telling the game where a player is really at sometimes, but it's not as irritating as I'd come to expect of oversea online play.
Currently the only way of playing online is either joining or hosting a server in a form of server codes loaded as symbols(e.g. Volcano-Moon-Tree) along with choosing a region. So basically it's either find some friends you know to play with or play the guessing game. I would assume this will change in the future.

[POSSIBLE BUG]: when a friend of mine and I were doing 1v1s, whoever hosted had won in a game, it would cause the client player to not load the countdown at all for the next time a game was loaded and also not showing up as a player on the left side of the screen to the host either, while leaving the other player awkwardly free roaming. In result we would have to restart the server room when this happens

~Local multiplayer~
It works :v
only thing that bugs me is that it's a forced 4 screen split even if you are playing with 2 or 3 players.

~Conclusion~
I'm having fun so far. I have hopes for this game seeing a future and if the devs are reading this, thanks for having me play with you guys. :)

It seems like the game's development has really ceased.. Very fun
lack a little more arms and defense
but it give us realy good time. There is no server browser, multilayer lobby or any random quick join feature and they will not be implemented in the game at all according to devs.
In order to play online you have to know game server code which consists of 3 symbol sequence, said server must be hosted by someone and you can't join while there are others players already playing.
In 3 hours I haven't found any ongoing games except developers twitch stream, which I was to late to join.
Also there is no split screen for 2 players, only for 4, so you will have half of you screen space occupied by "press A to join" labels.