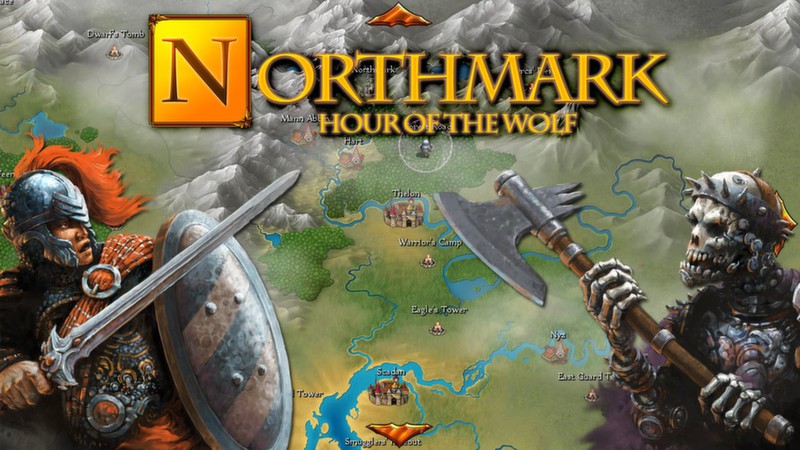 Experience all the thrills of adventure in Northmark: Hour of the Wolf, a card-based RPG. Choose to become a mighty warrior, cunning mage or powerful druid as you fight for glory and survival in arena combat. Explore every corner of the kingdom from fiery deserts to deep forests and cold mountain peaks and Journey to the kingdoms of the elves and dwarves.

But beware! Danger waits at every turn as you investigate the chilling mystery that threatens your homeland. Can you defeat assassins, thieves and hideous monsters? And who is the enigmatic stranger known only as The Wolf? Find out in Northmark: Hour of the Wolf. 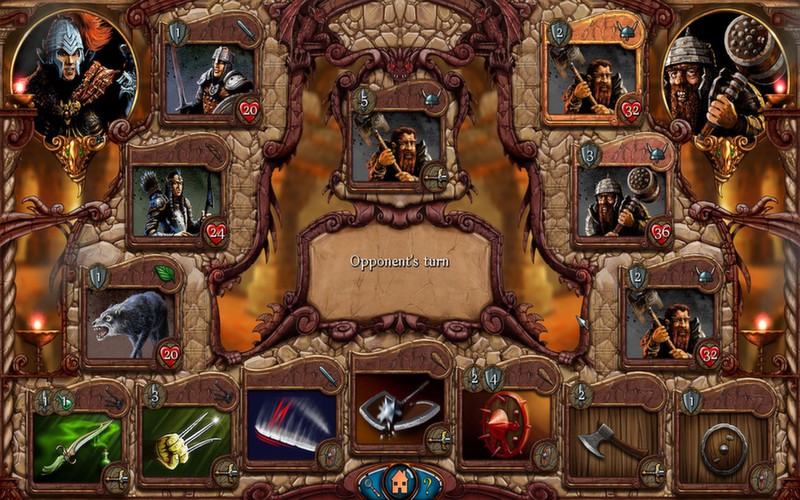 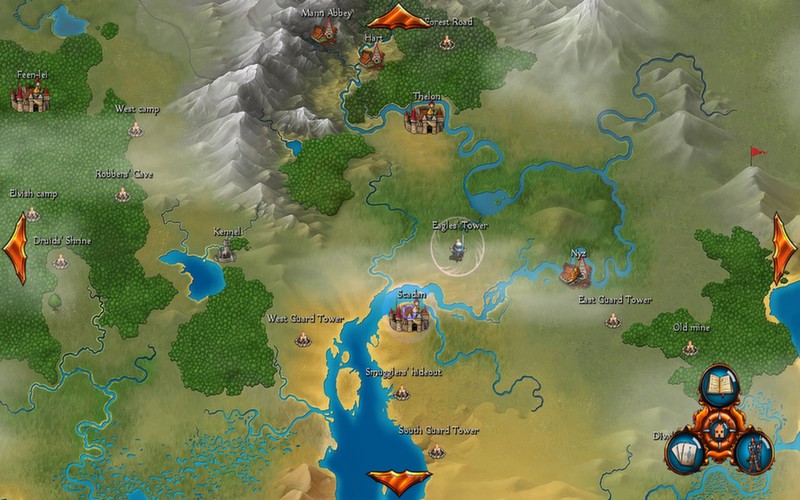 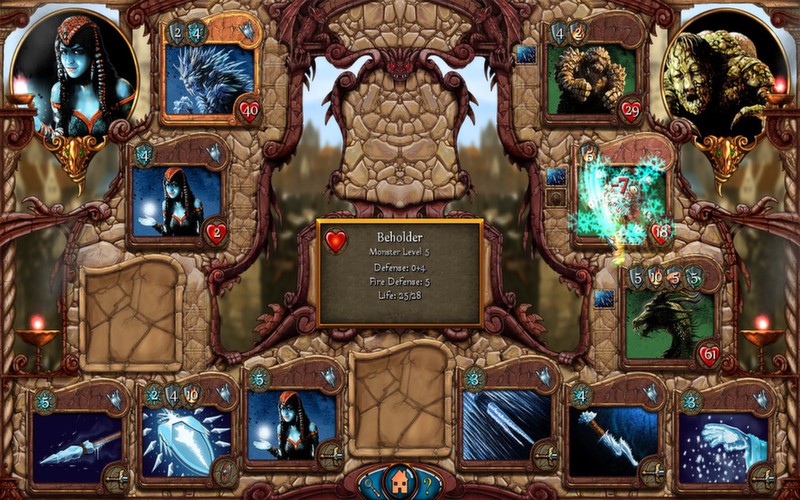 - very easy. I think i lost only one fight in the whole game and that was right at the start when i didnt understand what i was doing
- very short. It takes about 3 - 4 hours to finish all quests and sidequests, even if you read all the story texts.

I still recommend it. It was a fun evening and i am hoping for more campaigns.. Cute little card combat game which I bought in the 'Rake in Grass' bundle (on Steam). Fun diversion which can be completed in a few hours with 100% achievements.. Fun RPG\/card strategy game, very unique combat system. Hoping for more content.. (Completely updated review after first completion of game)

Summary: this is a good, fun game, but short with not a whole lot of replay value...

Cons: Scope of game is quite small; not a lot of cards, characters, quests, etc... I beat the game just shy of four hours. Difficulty curve vanishes after you 'figure it out.' Would also be nice to have a text speed option; lots of clicking to get through dialogue.

I still recommend as a good\/fun game, and the price is fair. Interresed to see if they expand\/develop a new (bigger) story line at some point...

EDIT: The fact this game is short could actually be a PRO, because now I actually feel like I've completed a game in my library :). Really short, not great. The writers tried to be funny and failed. Other dialogue is dreadfully mediocre and poor at best. There is very limited strategy to the game. Most fights are really easy but a few are a bit rough if you tackle them too early unless you spent your points in the right places. Usually I just buff the snot out of one stompy unit and focus attacks on one enemy unit at a time. I also couldn't see the point in spending many stat points on defence since the faster I kill off one of the enemy's units the sooner I'd win the fight. Focus on attack and spread those points around to several different damage types and you're guaranteed to hurt anything you hit - even if only for a few points.

Even though it's not a great game something made me stick with it until I played the whole thing through. If you like card-based RPG game mechanics, can put up with bad writing and a poor story line with "twists" you can see coming way before the game "reveals" them, so-so graphics and generally a *meh* feeling all the way through you should buy this one. On sale. Like 80% off. Or more. Yeah, can't recommend this - you've been warned.. Northmark: Hour of the Wolf is a RPG with a card-driven battle system.
The plot is intriguing, with humourous little twists. The battle system is partially original and functions well, although not very polished.
The whole single player campaign took me about 3 hours to finish, including completing all side quests, finding secrects and beating all arenas.
So the game is a nice dessert. Recommended at discounted price.. I normally stay away from card based games, but this is a cute little one. Its really easy though, and seems to be a mobile port. Besides that, its pretty fun. The rules are simple to learn, each stat has an attack and a defense, so like 3 fire magic -2 fire defense is 1 point. Theres basic attack\/defense and then ice, fire, and poison. Your hero, of which there is a few classes to determine your starting cards and stats, also has base stats which boost the cards. You wander around a map, each location has little icons you can click (and hidden ones too with gold you have to search for). Theres also riddle chests (like in Betrayal at Krondor, one of the best RPGs of the 90s). The riddles are easy, but fun.

Its really easy to understand and pretty fun - if simple and kind of easy. The only complaint I have is no matter if you pick the obviously female Ice Mage character, all the text refers to you as "he". Annoying.. I will start by saying that the combat sections and the way the game is presented is very good. finding the right cards and tactics to defeat certain encounters is very enjoyable. The dialogue for the most part is well presented aswell, a few spelling mistakes here and there but nothing major.

The main thing i wanted to talk about is something i feel is just casually mentioned and brushed past. That is of course the length and content of the game. my play time is not representitive of how long the game is since i am not very good, went afk, needed to retry several encounters multiple times and run around each shop looking for those cards to give me an edge.
I think the content of the game is around 3 hours, you fight very similar battles and multiple tries help inflate the game but for pure content i think 3 hours is about right.

I cant help but feel that the game had more to offer and just didnt deliver on it, like the game was pushed out the door early or just not enough care and attention was put into it. I understand its an indie title and its only \u00a35.50 (7 if not on sale) but there are indie titles around that price that have far more content then this one has and far more replayability. By the end of it i just felt like i was missing that little bit more.

whether the game is worth the price for the content it offers is very much personal preference and you can decide that for yourself. If this game was more expensive i would not recommend it to you but it gave me a few hours of fun for just over five pounds. I dont feel ripped off, just a little disappointed. If you enjoy these kind of games then absolutely give it a try.
. Okay I'm going to try to keep this simple as honestly I'm pretty confused how I feel about this game.
I enjoyed every minute of playing it, but at the end of it I'm feeling empty. I literally did everything I could, fought every battle visited every location cleared every arena and got every achievement. The game could be finished easily a lot faster than my own clocked hours,
I was crawling and searching through the dust hoping for more content.
What is here is really solid, good battle system, a decent selection of cards.
Replayability? Little to none, personally I doubt I will play through this again. There are no random encounters, just scripted story encounters. There are the arena battles which personally I found the most interesting as some of them had unique foes that could be a bit more challenging.
Difficulty wise overall I would say it is a bit on the easy side. Not too bad but there is no difficulty setting option so one size fits all in this case beginner to veteran.

So to summarise-
Do I regret buying this game?
=Not at all, I did enjoy the time I played it.

Is it value for money?
=Overall yes, cheaper than a movie and prob about twice as long without hurrying. Though there are better value for money games out there at this price or less. I would probably wait for a 50% off sale on it

Would I recommend you buy it?
=Conditionally yes, just don't go into with huge expectations. I would say most people will play through once, enjoy it and shelve it. Without a multiplayer or random battles it is not long enough to warrant a replay.
It is unfortunate as what's here is good.