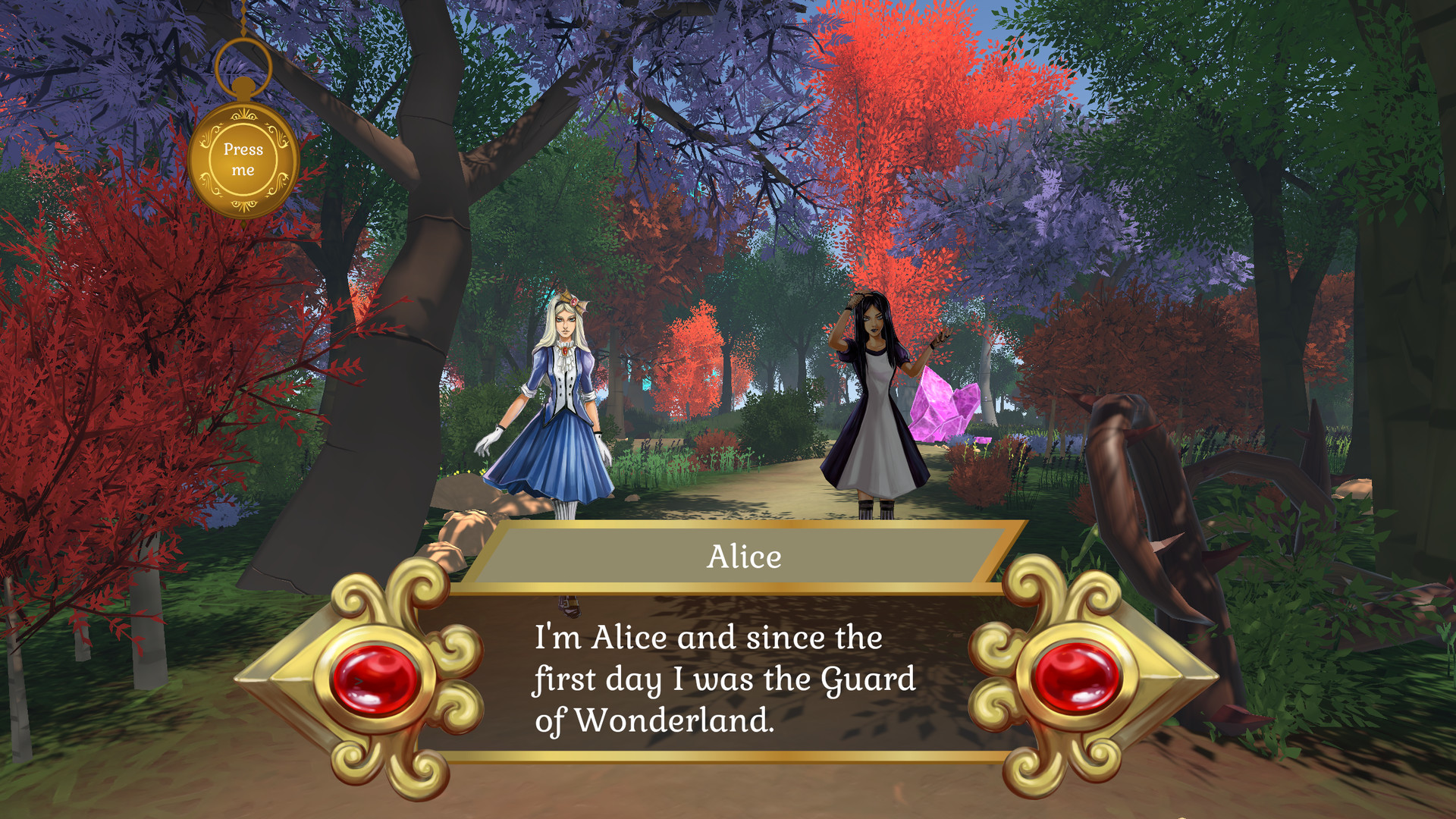 Guard of Wonderland is a visual novel created from our inspirations of "Alice in Wonderland"; a tribute of respect and love for the author's talent. Here is the atmosphere of absurdity and, at the same time, the beauty of the world in the book, but with new characters and an unconventional look at the story of Wonderland. Adventures will reveal a terrible story, where phantasmagoria, influenced under the impression of the book, intertwines with the eerie reality of our world!


♟ The insane journey through the phantasmagoria of Wonderland
♞ The plot presented in verse and visual images
♜ Interactive gameplay with bosses
♝ Several alternative endings that depend on your actions in the game
♛ Use weapons, collected items and allies to find the key to victory!

Special thanks to Richard "Levelord" Gray, the game designer of legendary games, who inspired the Wonder Games team to develop their own, for his invaluable contribution to the project. 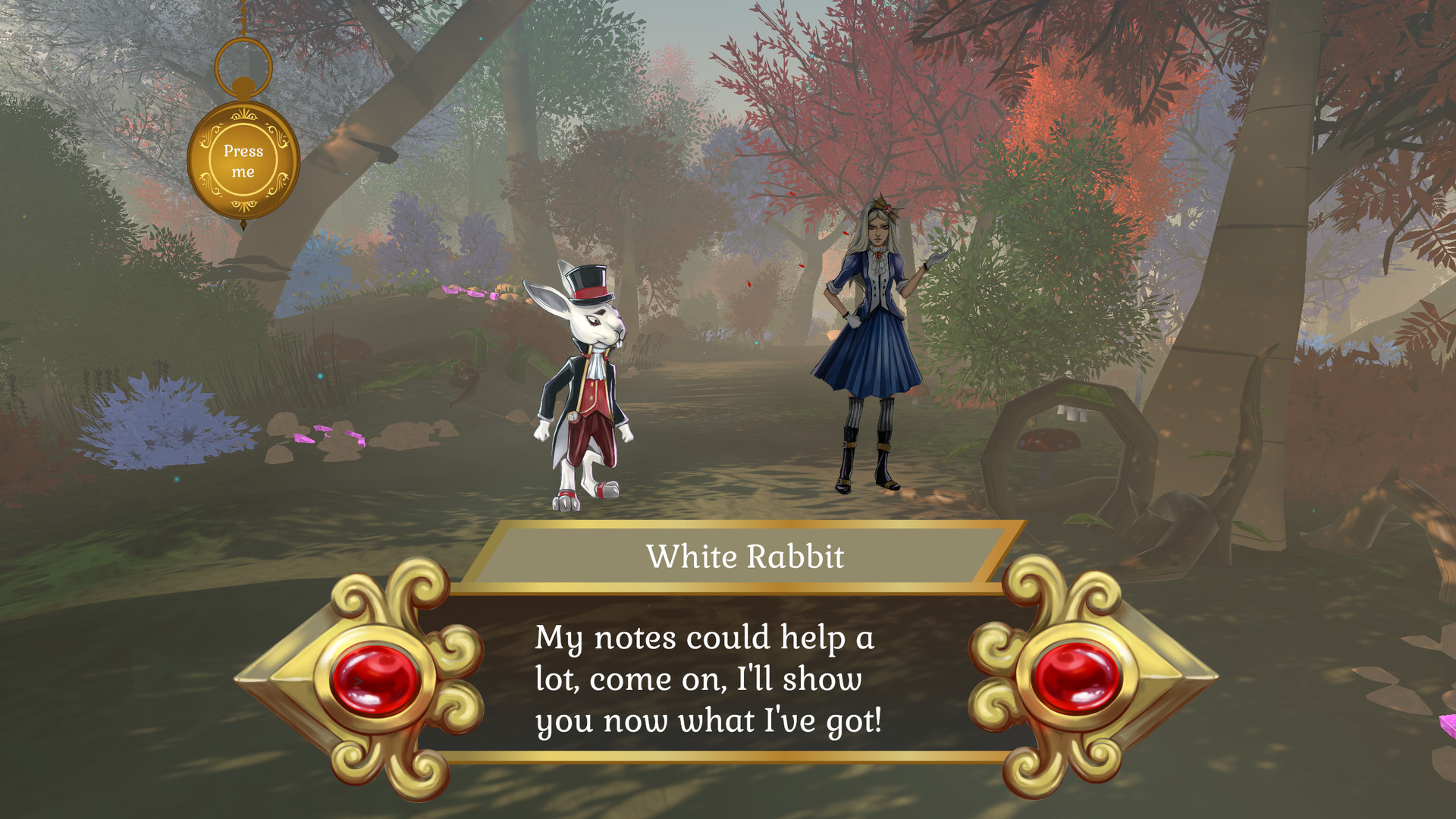 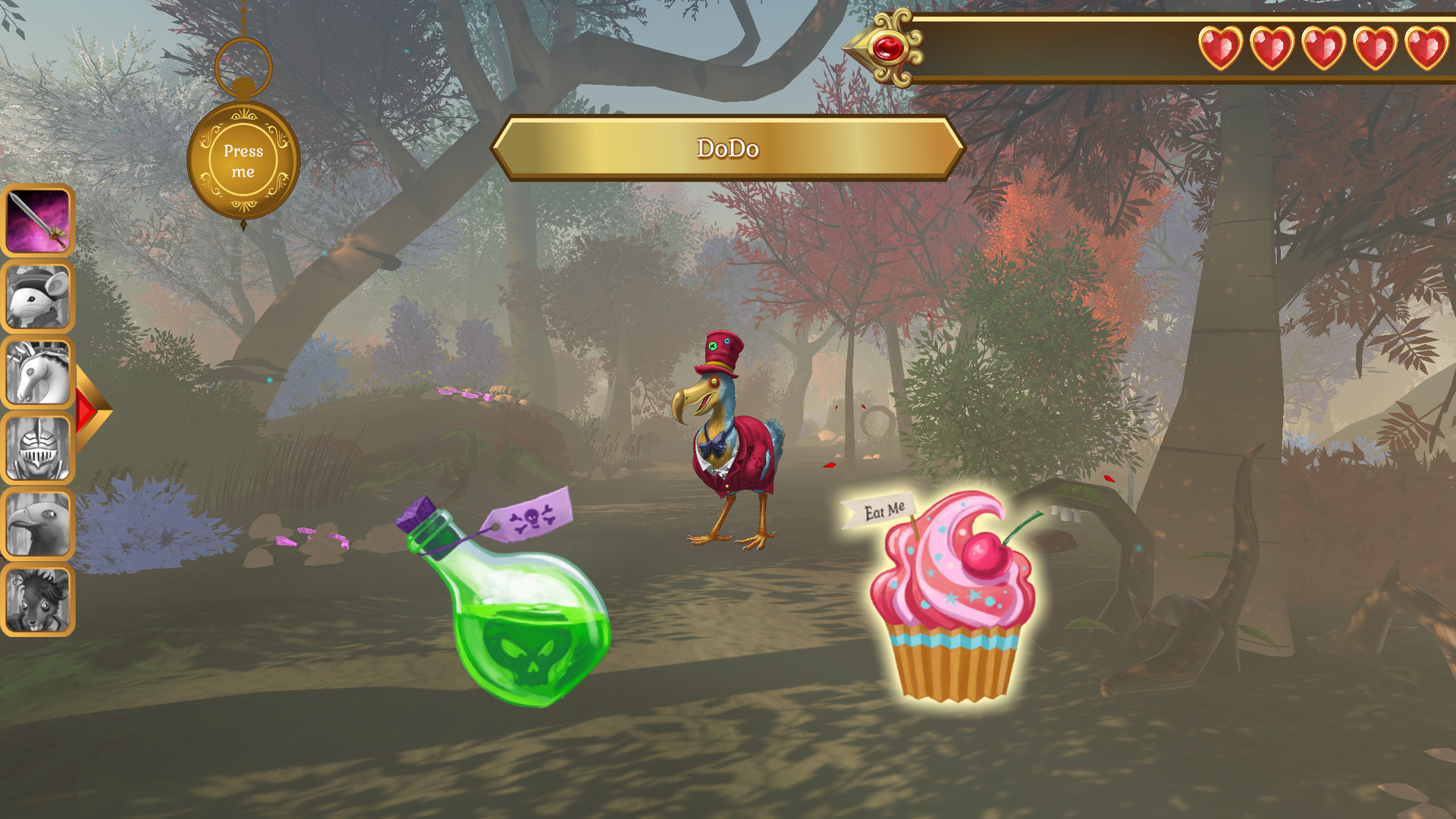 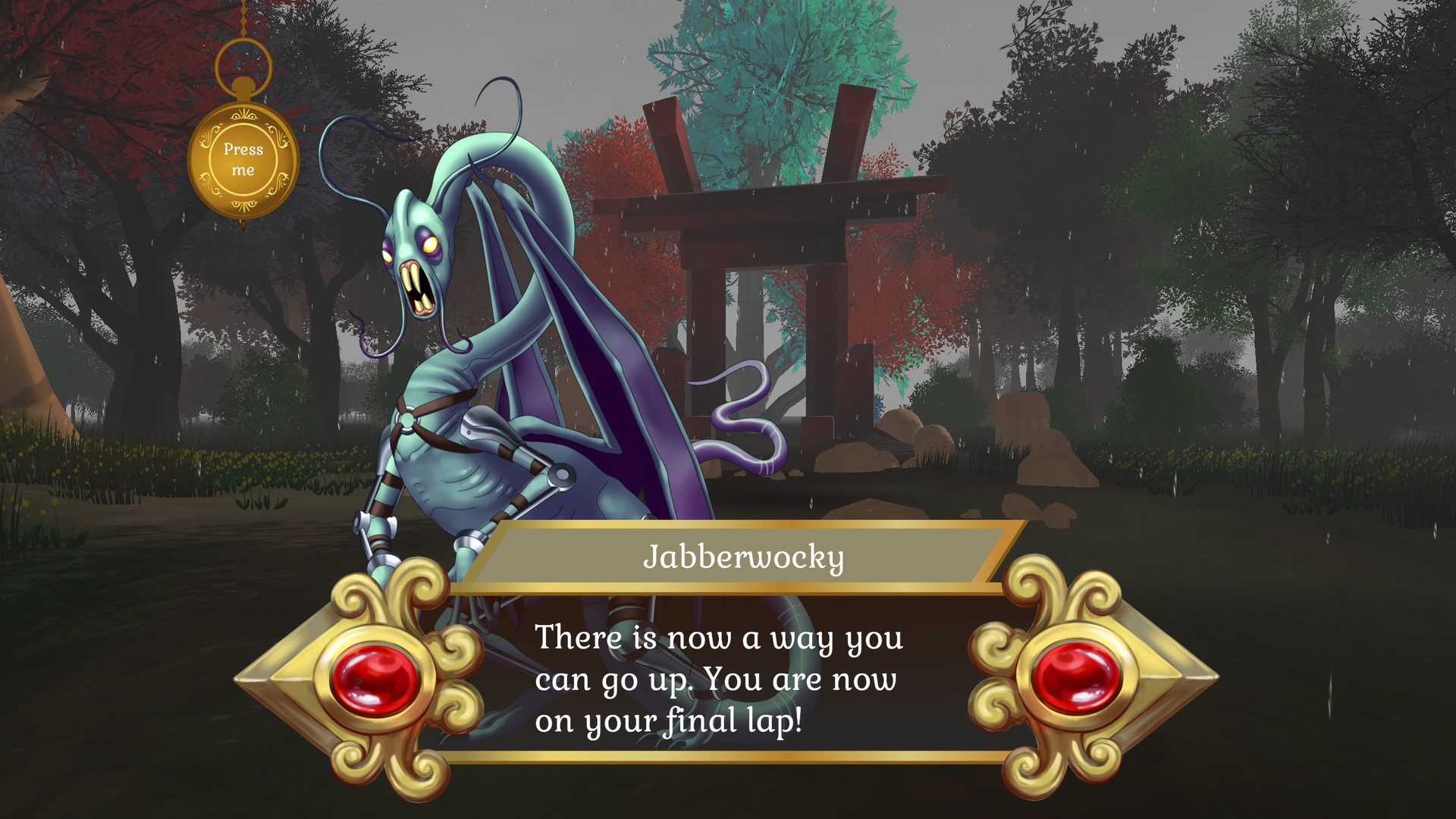 
I just finished playing Guard of Wonderland today, using the blonde Alice character. I am a fan of the Alice books and read Alice\u2019s Adventures in Wonderland, Through the Looking Glass, and even Hunting of the Snark. Guard of Wonderland is interesting and fun, but short and at a few points confusing. Overall though, I do recommend the game to fans of Lewis Carroll\u2019s Alice works.

I will go through what I felt were the pros and cons of Guard of Wonderland here, and will try to avoid spoilers.

Pros
1.\tThe game has a good atmosphere. It is colorful, and holding the right mouse button allows one to look around the environment. There are weather effects like rain, as well as atmospheric sounds like birds chirping.

2.\tThe music was very soothing and contributed to the feel of the game.

3.\tYou save automatically upon quitting, wherever you are. I needed to quit the game a few times and was happy to find afterwards that I resumed right where I left off.

Cons
1.\tThe game is very short. I played through as blonde Alice, and finished her campaign in almost 90 minutes.

2.\tThe beginning of the game is immediately confusing because you are given the choice between a blonde Alice and a black-haired Alice. However, there is no indication in the character selection what the difference between blonde or black-haired Alice is. I played the blonde Alice as that was the color of Alice\u2019s hair in Sir John Tenniel\u2019s original Alice illustrations. It\u2019s unclear at first if the choice between them is cosmetic or if they are actually different characters, although later gameplay indicates they are indeed different characters. Hovering the mouse over the Alice pictures doesn\u2019t bring any descriptions. I would have liked for the differences between the 2 Alices to have been clear in the character selection, and it was not.

3.\tThere is no tutorial other than a display of the Battle Controls page from the options menu. While this explains the basics of combat, it does not go over the nuances such as what it means when the left arrow, right arrow, or down arrow is displayed with a letter in combat. For a while, I was confused why moving my mouse right, left, or down seemingly did nothing until I realized that I had to hold down the right mouse button and then move right, left, or down. This isn\u2019t explained clearly in any tutorial or the options menu.

4.\tOn the subject of combat, it\u2019s very simplistic. There are 2 nonsensical weapons to attack an opponent. For example, my second fight offered the option to attack an enemy with tofu or salt\u2026 If I chose the wrong weapon, I was taken to a quick time event where I had to hit a letter and move the mouse in a direction while holding down the right mouse button to dodge an attack, otherwise I would be hit. If I chose the correct weapon, the monster would lose 1 hit point. Since most monsters only have 2 hit points (a few bosses might have 3 or 4), combat is short, simple, and unfortunately dull. If you select the wrong weapon, all you have to do is succeed in the quick time event to dodge the attack, then choose the correct weapon afterwards. There\u2019s no challenge at all in combat. Combat was so simple that I never needed to use any of the allies that joined Alice.

5.\tThe weapons and inventory are nonsensical. Aside from salt and tofu as weapons, we have tea, raspberry, cupcakes, fans, forks, and other items. None of it makes any sense. Pressing I for inventory shows all your weapons, yet none of them have any descriptions or stats and hovering the mouse over them displays nothing. There is no way to know which weapon is effective against an enemy aside from trial and error, as the weapons have no statistics or distinguishing features.

6.\tSeveral characters look nothing like how they were described in the original books or illustrated by Sir John Tenniel. The Hatter in the game is way too handsome and looks like a movie star, and not at all like the character in the original book illustrations. In the books, Tweedledee and Tweedledum are clearly described as \u201ctwo fat little men\u201d. In this game, Tweedledee and Tweedledum look like two frail, thin small boys. What happened here?

7.\tThe battles are seemingly unconnected to the main plot, except in maybe the last chapter. Alice would go along talking to various characters like the Hatter, the Caterpillar, the Red Queen, and others and then a fight with a random enemy happens. Then the story continues onward without even mentioning the battle! This happens throughout the game and is very jarring, and breaks suspension of disbelief. Only in the last chapter, when you fight bosses, do the fights start connecting to the story.

8.\tOn this same note, character dialogue often does not match up with the scenery. Alice at one point says \u201cIt\u2019s as dark as a chasm\u201d, yet the surrounding area in the game itself was still fairly well lit.

9.\tThere do not seem to be any meaningful choices in the game to make. You just click through the dialogue and the player never makes any decisions. Outside of battles, you feel you are reading about Alice rather than actually playing her.

10.\tThe dialogue, while having a style of verse that fits with the Alice books, was often very confusing. While you could still figure out the story through much of the game, the ending was just not clear. It was just a lot of verse that didn\u2019t make sense. In fact, I\u2019m not sure I actually know what happened in the ending. The verse was not straightforward. I wish the devs had said \u201cAlice defeated the queen, then saved Wonderland and found a portal home\u201d (just an example, I\u2019m not actually reciting what happened in the ending). Clear simple words in the ending would have made it less confusing.

The game have a lot of interesting mechanics and stuff in gameplay and storyline, really makes it worth buying and playing.
The only thing I wish that the devs fix some bugs and improve optimization!. Suggest this is one those games that return me the faith in gamedev =D
I'm kidding )) but it's surelly good game